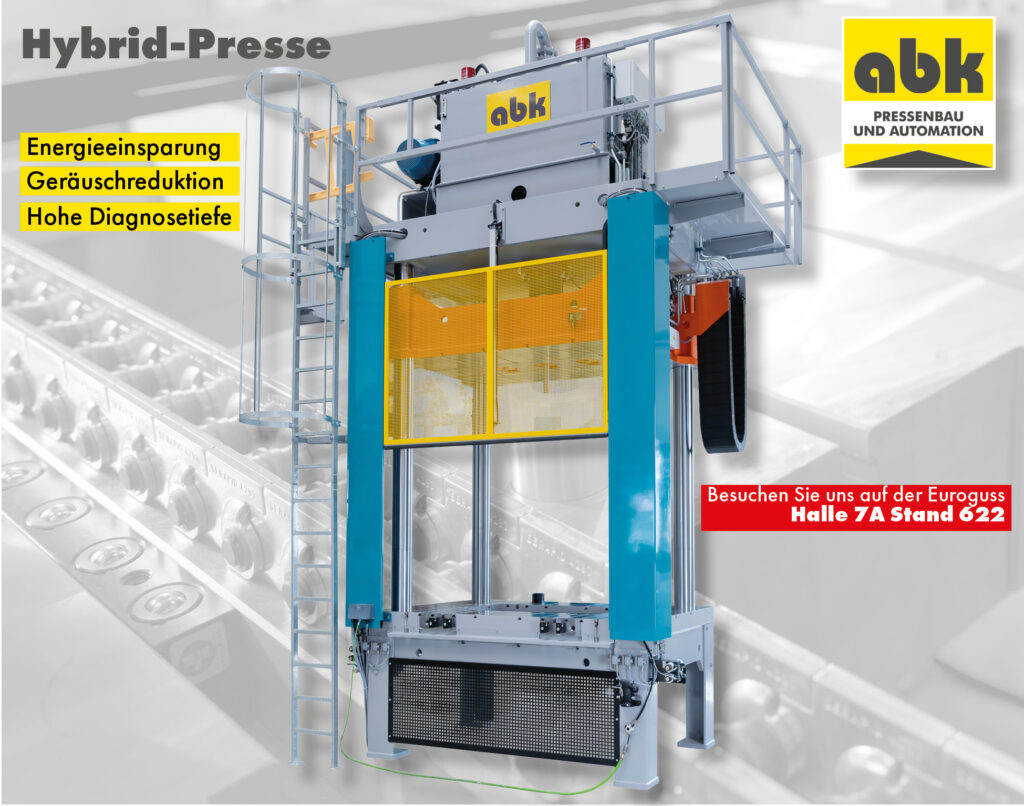 Aulbach Automation GmbH abk Pressenbau is presenting an innovative new development at EUROGUSS 2022 in Hall 7A, booth 7A-622: a hybrid solution for trimming presses with various components and system solutions from Parker Hannifin.

The client is fischer Rohrtechnik GmbH, a subsidiary of the fischer group, the world’s leading supplier of longitudinally welded stainless steel tubes.

Like the components to be processed themselves, fischer Rohrtechnik’s requirement profile for the new trimming press was demanding. The focus was on a simple concept, that was intended to ensure quick commissioning on the one hand, but also a high level of operational reliability, process stability and depth of diagnosis. Associated with this was the demand for above-average machine availability and a longer lifetime. Against the background of the recent increases in electricity prices, energy efficiency in particular has once again gained in importance: The cost reduction through lower energy consumption has an ever greater influence on the operating costs and should therefore also be given special consideration in the overall concept, at the request of fischer Rohrtechnik.

The company opted for abk Pressenbau, whose presses are based on standardized modular solutions on the one hand, but can also be easily and inexpensively adapted to individual customer requirements on the other.

The energy efficiency, which is already very high in the basic version, can be further improved by up to 25 percent with the speed-controlled hybrid drive developed jointly with Parker. For increasingly complex tools, which also include machining tasks, the hybrid drive of the abk presses not only saves energy in the main movement, but also offers the advantage of precisely controlling these secondary functions. The hydraulic system is based on the press control block jointly modified by Parker and abk based on the standard block of the PPCC series for presses according to DIN EN 289. The PPCC series brings with its modular design, the low pressure losses and the proven safety concept according to DIN EN ISO 16092 best conditions. In addition to the compact design, the standardized hydraulic press control also enables a high level of operational reliability. The basic block already contains all the functions that are required for a press control in accordance with current standards: for example with a pressure relief valve at the P connection. The block is combined with a variable drive concept, that is precisely tailored to individual requirements. Thus, with the Parker components – a Drive Controlled Pump (DCP) consisting of AC30V frequency converter, asynchronous motor and axial piston pump – the noise emissions are reduced and energy is saved. Another innovative solution that abk uses in its hybrid press is Parker’s electronic load compensation “electronic Load Controlled Pump (eLCP)“, in which the hydraulic return is replaced by an electrical one.
The eLCP allows flexible and sensitive volume flow control of the different axes and often avoids complex closed speed- or position-control loops. The energy consumption of the hybrid solution compared to a standard solution without a variable-speed drive could be determined in advance using the Parker “DriveCreator” design tool. A saving in electrical energy of 8 Wh, i.e. around 14 percent, was determined per cycle. In addition, other system components can be made smaller and therefore more cost-effective. Last but not least, noise emissions haven been significantly reduced by the DCP.
Hybrid drive advantages:
The abk solution not only impresses by its technical superiority and low operating costs, but also improves the ecological footprint of the application!
Go to Top
Zum Ändern Ihrer Datenschutzeinstellung, z.B. Erteilung oder Widerruf von Einwilligungen, klicken Sie hier: Settings